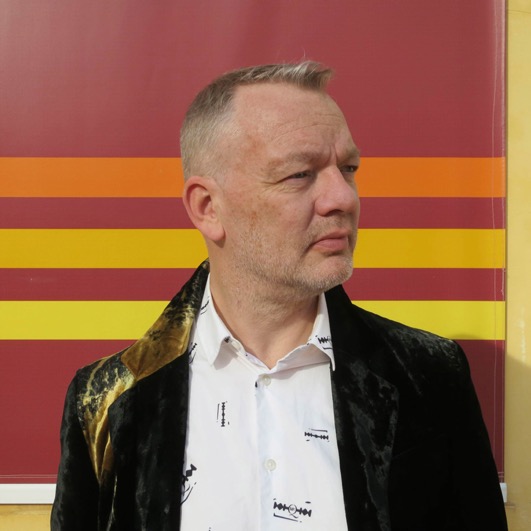 The Foundation helped support the commissioning of Richard’s Riflesso sullo spazio, and released a recording of this on our label.

Riflesso sullo spazio (‘reflection on space/time’) is part of the Riflessi series, which consists exclusively of companion pieces: each Riflesso explores the same exceptional scoring of a classic from the last century. Riflesso sullo spazio is a companion piece for Arnold Schönberg’s Suite, his opus 29. It is scored for clarinet in E-flat, clarinet in A, bass clarinet, violin, viola, cello and piano.

The work is a series of variations on the name of Arnold Schönberg. As a matter of fact the composer’s name contains a total of eight letters that can be interpreted as pitches (A-D-S-C-H-B-E-G), bearing in mind that in German musical nomenclature the letter B stands for a B-flat, the letter H is read as a B-natural, and the S is an E-flat. The first bar of every variation – there are thirty-five in total – is composed solely using these eight pitches, each exploring a different intervallic characteristic. From this method melodic fragments may sprout, though melody is rarely the most important feature, nor do the rhythms and dynamics vary significantly.

More than anything the piece focuses on harmony, patterns and repetitions, and in doing so you might say it is a personal response to the late works of Morton Feldman. Now that his name is mentioned, it was specifically this legendary composer who in a 1982 interview reiterated that when John Cage studied composition with Schönberg, he was told by his teacher he had no feeling for harmony: “You’ll come to a wall you won’t be able to get through”. Cage’s response to Schönberg was: “Well then, I’ll beat my head against that wall.” The motif that can be constructed from his name (C-A-G-E) appears twice in Riflesso sullo spazio, as a tongue-in-cheek cameo, and so does B-A-C-H, albeit only once.

The structure of the composition is one of regular expansion, in which a crucial role is reserved for the listener’s memory. The piece opens with one solitary section bearing the heading Iniziale. What follows are an ear-catching interlude and two variations. Next up are the repeat of the interlude succeeded by three variations, another interlude and four variations, etcetera, etcetera. In other words: the space between interludes gradually increases, and time passes as if it were an expanding galactic spiral. After nearly forty minutes, when the interlude appears for the eighth time – again, eight being the amount of pitches in Schönberg’s name – the piece signs off with a final section entitled Autografo.

composed with financial support from

At the Purcell Room, the Ives Ensemble […] presented an evening of mostly recent music by Richard Rijnvos (b.1964). [His] three works, very distinct, attested an ingenious musical mind. Riflesso sul tasto, for three players (2007) and Riflesso sullo spazio, for seven players (2019) are respectively the first and latest of his series of constructive “reflections” on 20th-century classics. The first, 14 minutes long, is a commentary on Stockhausen’s “Refrain” (1959) and deploys the same tintinnabulatory trio of vibraphone/glockenspiel, celesta and piano to felicitous, vigorous effect. The second was a 40-minute, darker, rather minimalist study on Schoenberg’s Op 29 “Suite” for clarinets, strings and piano – an unusual septet scoring, now endowed with a completely new character.

Riflesso sullo spazio […] consists of repeating, intoxicating patterns, each time with a different character. The three clarinets often merge with the three string players. The sounds come and go, like waves in the tide. In most cases the piano functions as a kind of beacon, marking the transitions between the various patterns. The strength lies […] in the repetition. It gives the piece, which is […] more than forty minutes long, something meditative.

Rijnvos’ principle theme became A-D-S-C-H-B-E-G […], which he worked out in the form of an introduction, followed by interludes and variations into a fantastically beautiful, expanding discourse. Both rhythmically and harmonically the piece is completely homophonic and also the dynamics remain almost the same for 40 minutes. As a result, all attention is focused on the timbral combinations, which are always of great beauty.

Riflesso sullo spazio […] offers a succession of steadily oscillating or shifting harmonic fields, each of which is established differently in a subtle way. There is an interlude that reappears regularly as a beacon. Arpeggios and subsequent elaborations in the piano form a constant factor in this work, which evolves ever so gradually, to the extent that a staccato chord feels like a shocking event. The twilight harmonies lead to a mixture of well-being and slight discomfort that keeps the piece exciting […] for forty minutes.