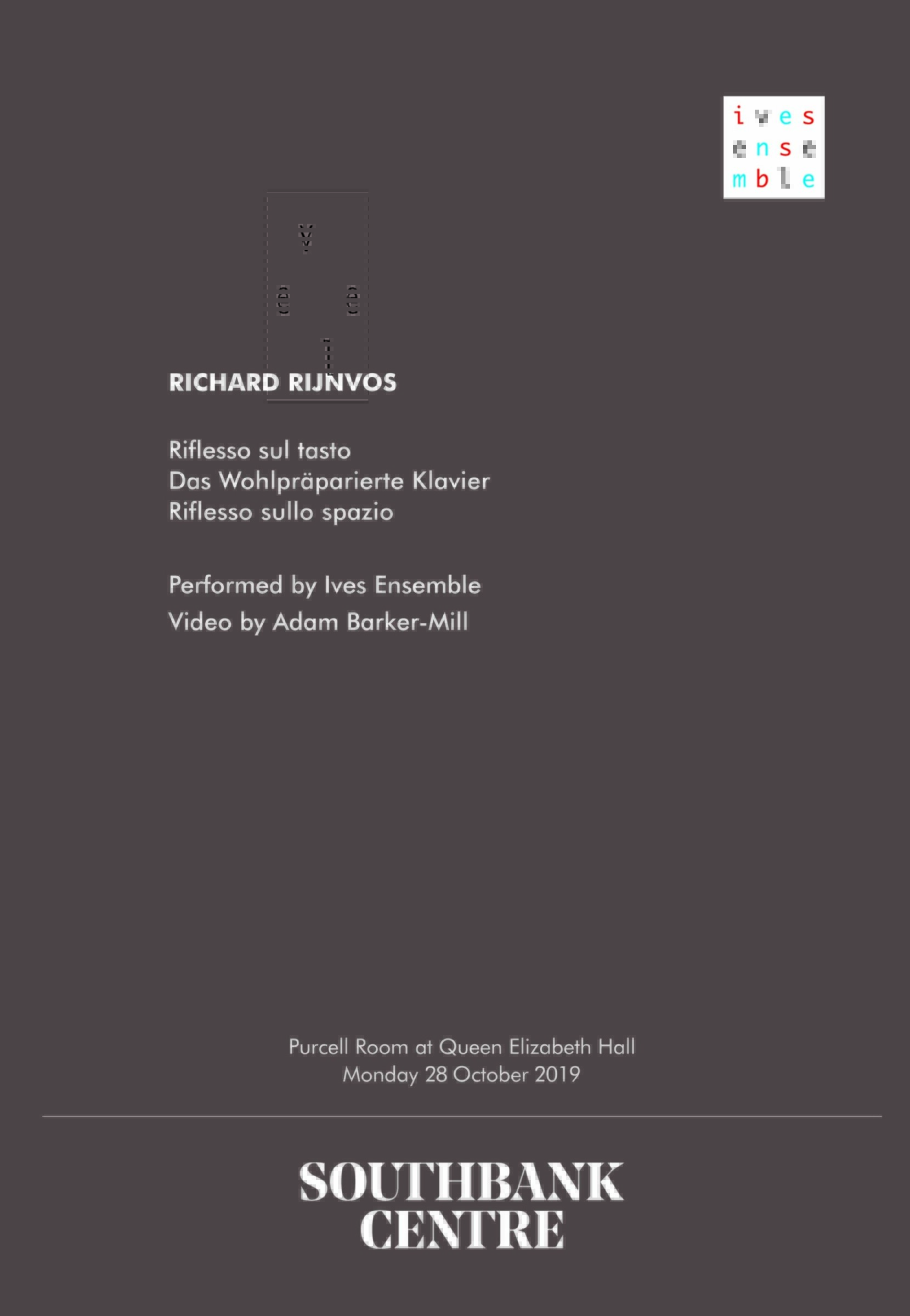 These 3 compositions by Richard Rijnvos were played as a launch concert for our latest release with the Ives Ensemble, Riflessi

Performers from the Ives Ensemble were:

In 2007 Richard Rijnvos started a series of compositions under the collective title Riflessi. ‘Riflesso’ is Italian for sheen. It is cognate with the more familiar word ‘riflessione’ (reflection), yet its meaning has additional subtlety: reflective light of a tone different from that of its source. The Riflessi series consists exclusively of companion pieces. In other words: each Riflesso explores the same exceptional scoring of a classic from the last century.  We presented the most recently composed – Riflesso sulla spazio, (2019) along with the first in the series,  Riflesso sul tasto (2007).

Riflesso sul tasto is a companion piece for Refrain (1959) by Karlheinz Stockhausen. This particular work is widely known because of the unconventional look of its score: arch-shaped staves plus a transparent strip with additional notes. The position of the transparency is free and decided upon by the performers. Thus the form of Refrain differs substantially with each performance. In the year 2000 Stockhausen created a new version of the piece, entitled 3 x Refrain 2000, dismissing the unpredictable parameter of the strip to the bin. However, the strip has now become part of a recycling programme: its notes, trills, tremolos and glissandi cast reflections on the score of Riflesso sul tasto.

The genesis of  Das Wohlpräparierte Klavier goes back to 5 October 2012 when Dutch pianist John Snijders was making the necessary arrangements for an evening performance at a private house in London. The concert featured a single work for prepared piano: Sonatas and Interludes (1948) by John Cage. The long and laborious process of preparing the piano was captured on camera and made into a documentary film by the British artist Adam Barker-Mill. Das Wohlpräparierte Klavier functions as incidental music for his video, somewhat in the spirit of Schönberg’s opus 34: Begleitmusik zu einer Lichtspielszene. The sounds on the video interact with those played live by the musicians. The music consists of four equally long sections, each exploring textures based on four consecutive fundamental pitches: C-A-G-E. We mainly hear ornamental overtones, but also sudden eruptions that are synchronized with the images.

Riflesso sullo spazio (‘reflection on space/time’) is a companion piece for Arnold Schönberg’s Suite, his opus 29. The work is a series of variations on the name of Arnold Schönberg. In fact, the composer’s name contains a total of eight letters that can be interpreted as pitches (A‑D‑S‑C‑H‑B‑E‑G), bearing in mind that in German musical nomenclature the letter B stands for a B-flat, the letter H is read as a B-natural, and the S is an E-flat. The first bar of every variation – there are thirty-five in total – is composed solely using these eight pitches, each exploring a different intervallic characteristic. From this method melodic fragments may sprout, though melody is rarely the most important feature, nor do the rhythms and dynamics vary significantly.

More than anything the piece focuses on harmony, patterns and repetitions, and in doing so you might say it is a personal response to the late works of Morton Feldman. Now that his name is mentioned, it was specifically this legendary composer who in a 1982 interview reiterated that when John Cage studied composition with Schönberg, he was told by his teacher he had no feeling for harmony: “You’ll come to a wall you won’t be able to get through”. Cage’s response to Schönberg was: “Well then, I’ll beat my head against that wall.” The motif that can be constructed from his name (C‑A‑G‑E) appears twice in Riflesso sullo spazio, as a tongue-in-cheek cameo, and so does B‑A‑C‑H, albeit only once.

The structure of the composition is one of regular expansion, in which a crucial role is reserved for the listener’s memory. The piece opens with one solitary section bearing the heading Iniziale. What follows are an ear-catching interlude and two variations. Next up are the repeat of the interlude succeeded by three variations, another interlude and four variations, etcetera, etcetera. In other words: the space between interludes gradually increases, and time passes as if it were an expanding galactic spiral. After nearly forty minutes, when the interlude appears for the eighth time – again, eight being the amount of pitches in Schönberg’s name – the piece signs off with a final section entitled Autografo.