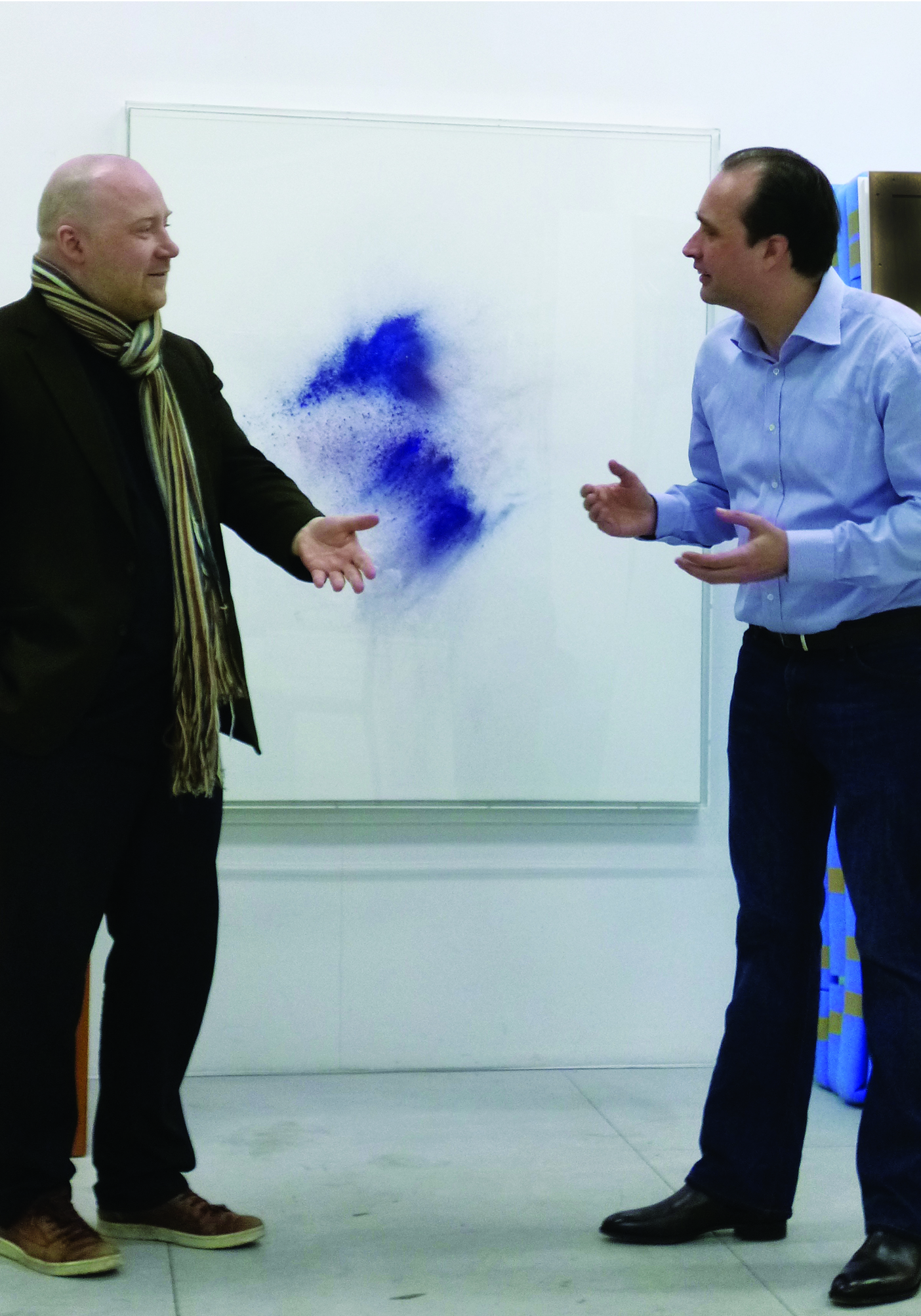 Jóhann Jóhannsson was an Icelandic composer acclaimed for his film music – including Theory of Everything and Sicario, for both of which he was nominated for an Oscar. We worked with Jóhann on this project for five years before his untimely death in 2018.

The project was a collaboration between Jóhann and the artist Thilo Heinzmann.  A chain of ideas that started with a conversation in Berlin in 2013 about why Britain should stay in the European Union, that turned into a painting on a well in Jóhann’s studio in Copenhagen, that became a composition with a subliminal message for a British audience.

The posthumous recording of the piece was released by Deutsche Grammophon in September 2019 (here).  We also created a limited edition release with Thilo (here).

RICHARD THOMAS in interview, January 2019 during the recording session

How did the commission come about?

Does a composer writing music go through the same fundamental processes as an artist painting a picture? Almost all composers will immediately understand the similarities; however for many visual artists the answer is not so obvious.  They will point out that the composer is writing the music for someone else to play – perhaps ignoring that often artists will have assistants, and many others, helping them to bring their work to the attention of an audience.

I’d discussed this question with Thilo Heinzmann, the Berlin based painter to whom I had been introduced by Charles Asprey. As a great lover of music and noted record collector, Thilo was intrigued. In 2012 I asked him if he would consider working in collaboration with a composer.  Without hesitation he said that he would like to work with Jóhann Jóhannsson, and so this project was born.

By chance I was going to Copenhagen the next week where Jóhann lived at the time. So I phoned him up and said let’s meet for tea and we ended up sitting on the docks in the sun for about three hours talking and finding an awful lot of common ground and interests. And so that’s how the commission started.  I invited Jóhann to come to Berlin and meet Thilo and me, and the three of us just sat down and talked and about eight hours later we were still talking to each other and exploring what the collaboration might look like.

To get things going Thilo sent a picture to Jóhann in Copenhagen (reproduced on the back of this booklet) – which I actually didn’t see at the time – which ended up on the wall of Jóhann’s studio. During the initial process of talking we probably met two or three times. And at the end of those meetings Jóhann thought he wanted to create a piece of music which was informed by the conversations that Thilo and Jóhann, and I, had been having.

We talked about a great range of different things.  I’m very interested in continental European politics and the way politics in Britain is very different, both at a structural level but also in terms of the individual’s inclination to engage in informed political narrative. So we had a lot of conversations about these big issues but as we got to know each other better we also had a lot of very personal conversations.

The idea of 12 conversations isn’t literal, in the sense that it isn’t one movement representing a particular date on which we all got together and talked. It’s more a description of the great range of differing emotions and moods and topics that we were talking about.  What I don’t really know is which is which.   Some movements seem to me a description of the sharing of our life’s sadnesses and I can certainly hear melancholy moods in some of them, whilst others seem much more optimistic.  Some look outwards and some look inwards.

What would you say would be a trait that you and Jóhann and Thilo had in common?

The three of us had each manifested slightly compulsive characteristics in the past so we could share that.  One aspect of this is that Thilo and Jóhann were  exceptionally dedicated to their work and for both of them over the course of their careers it’s meant extreme compromises in terms of putting their work first ahead of many other things in their lives including the personal.

Do you have a favourite piece?

One of the challenges in answering that is that Jóhann finished writing it about three days before the premiere, and I’ve only heard the music twice before which is when we premiered it in London in 2016. It hasn’t been performed since, and in hearing it now as we are recording it I’m finding something very different from before and I think I’m not going to know what my favourite movement is until I’ve heard the mix we’re making at the moment. If even there is one.

Who was Jóhann Jóhannsson to you?

Obviously at the beginning just a composer I’d met and quite liked. About a year after I first met him he moved to Berlin. From then on we saw each other frequently, in Berlin and London, and became very close friends.  So even more than a composer whose music I love he was a very dear friend that I miss.

How do you feel about this process that’s been going on – this finishing of somebody else’s work?

After the music was first performed I knew we wanted to record it.  Jóhann and I had a long talk about how we were going to do that and who would be performing. He wasn’t very happy with the work after it was first performed and so talked quite a lot about rewriting it, changing the order, or adding electronics. Some of the people Jóhann talked to about that were Neil and Meg from the Echo Collective, who had worked with him before and really understood what he was trying to do with his music and how to express the musical language that Jóhann had created. The first time I heard them run through the music it felt like Jóhann was in the room sitting next to me.

Could one say that there’s sort of a yearning or a longing in Johann’s music?

Yes – for me all of Jóhann’s music has a sort of search for peace. His life wasn’t completely straightforward. And when listening to his music you know some of it’s quite melancholic. But in the end I think his music is something which stills the troubled mind.