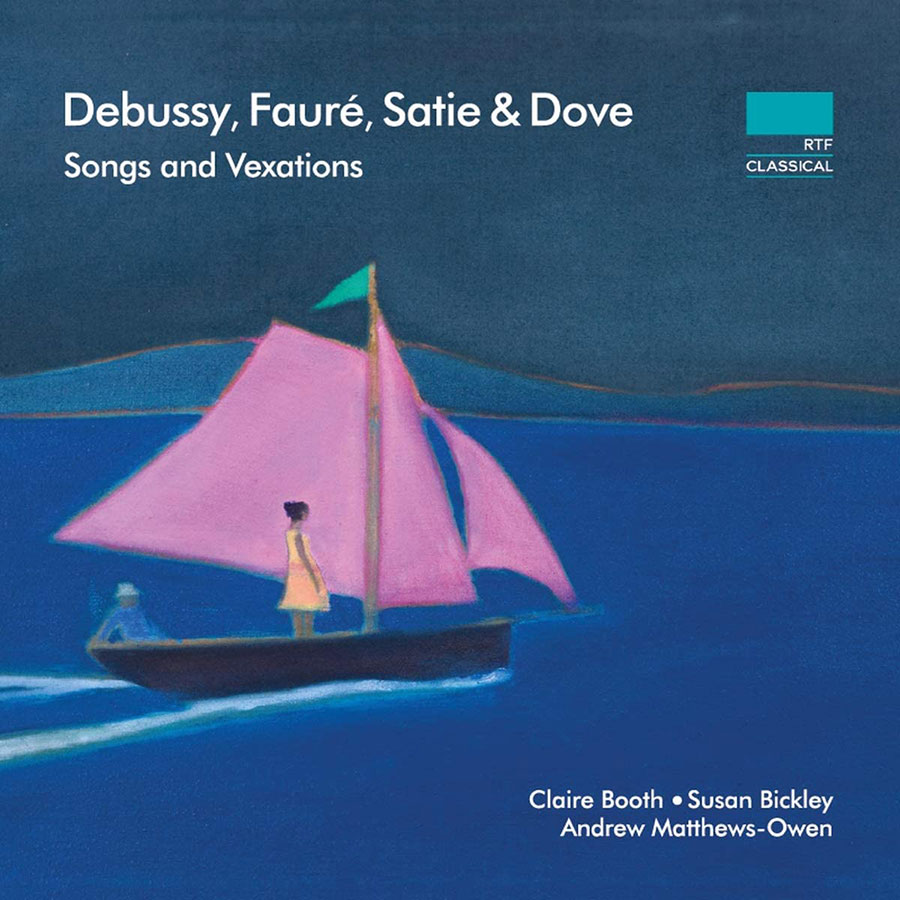 Following a concert at the Purcell Room in March 2018 including a new composition by Jonathon Dove (“Letters from Claude” commissioned by RTF), we recorded soprano Claire Booth, mezzo Sue Bickley and pianist Andrew Matthews-Owen in Monmouth in late May 2018.  Released in March 2019, the record reached the top 10 of the Classical Music charts.

“A careful and astute selection of some wonderful songs by Debussy and those around him, clustered around an eminently enjoyable new commission from Jonathan Dove” (Gramophone, April 2019)  “Beautifully curated”  (BBC Music Magazine, June 2019) “Highly recommended”  (Music Web) “a lovely collection of French chansons…intelligently organized program in a series of fine performances” (Fanfare, July 2019)

This is a lovely collection of French chansons, plus a cycle by the English composer Jonathan Dove (b. 1959) based on letters and fragments of letters of Debussy. The three French composers knew each other well. Although each had his own musical voice, they shared some stylistic tendencies, particularly in their songs, because in many ways the language itself dictates the shape of the musical line. Dove’s settings, written for soprano and mezzo-soprano either alone or in duet, fit in nicely despite being the only non-French repertoire on the disc. He possesses a gift for melody and writes well for the voice. The Debussy letters were written to the two women he married, Lilly Texier and Emma Bardac (Lilly shot herself in an attempted suicide when Debussy left her for Emma). Tying everything even more closely together, Satie was a witness at the wedding of Debussy and Texier, and Bardac had an affair with Fauré. None of this knowledge is essential for appreciating the songs, but it does add context and texture to some of them. Dove’s treatment of what appear to be genuine statements of love from Debussy to both women conveys tenderness and at the same time a touch of irony and underlying tension.

We don’t know Satie’s songs as well as we do Debussy’s and Fauré’s, and this disc helps to rectify that. For those to whom Satie conjures up an image mainly related to his curious titles (e.g., Three Pieces in the Shape of a Pear), the loveliness of these songs will come as a pleasant surprise. Élégie, which opens the disc, is an exquisite statement, as is Air du poète. Vexations is not an actual song by Satie but a wordless vocalise devised by Andrew Matthews-Owen, who is not only the fine pianist here but an excellent annotator. He reworked the theme of Satie’s piano work by that title. To quote Matthews-Owen, the piano music consists of “only half a sheet of notation. The challenge lay in what is still debated as a curious, some argue misinterpreted instruction by Satie to play it eight hundred and forty times.” Matthews-Owen and mezzo-soprano Susan Bickley share the theme, which leads directly into the final song on the disc, Satie’s Je te veux, a lilting waltz.

Bickley and soprano Claire Booth have both mastered the French style of forward, focused tone production, and both are effective in communicating the texts and their meaning. I do find that Bickley’s voice tends to spread a bit under pressure, but most of the time she is singing at dynamic levels that do not exert pressure. Booth’s bright and evenly produced lyric soprano is very attractive. The recorded sound could use a bit more focus. Overall, though, this disc is a success because it presents an intelligently organized program in a series of fine performances. Providing full texts and translations is another plus on the part of Nimbus.